Travis Rice slashes a snow wave near the end of the day in the Tordrillo Mountains of Alaska while filming for the Art of Flight movie. This was the last image I took after more then 4 weeks of shooting and sleeping in the mountains. This photo won the illumination category in the Red Bull Illume photo contest.


For info on this photograph:

I had been in the Tordrillo Mountains for 4 weeks with the Brain Farm Cinema crew documenting the making of the Art of Flight movie. From day one I had it in my mind that I wouldn’t leave without shooting a photo from a hovering helicopter looking straight down on a rider. Unfortunately setting up this kind of shot was much more complicated then I originally thought. We had 2 helicopters on this trip. The first was the film ship, fitted with a Cineflex aerial camera to the nose. It’s important for this ship to be as light as possible so that it could manoeuvre quickly so I wasn't allowed to shoot from that one. The second helicopter was the riders ship. It would shuttle the riders around getting them on top of the lines they wanted to ride and would pick them up at the bottom. As a photographer I would use this ship to move myself around when it wasn't possible to snowboard there. So when I found the right terrain to shoot my aerial photo, I had to coordinate the move I wanted to make with the film ship as it would generally fly all over the place to get the best shot of the entire line. In the end we decided I would just hover above the line, hang out the side and shoot while the film ship would do its thing around us. This was the best way to keep both helicopters from crashing into each other.

Once I was harnessed in and hanging out of the helicopter, we lifted up and hovered a few 100 feet above the line. Travis was called in to drop and made this single turn before disappearing over the edge. It would have been nice to follow him down the whole line but that just wasn't going to be safe. 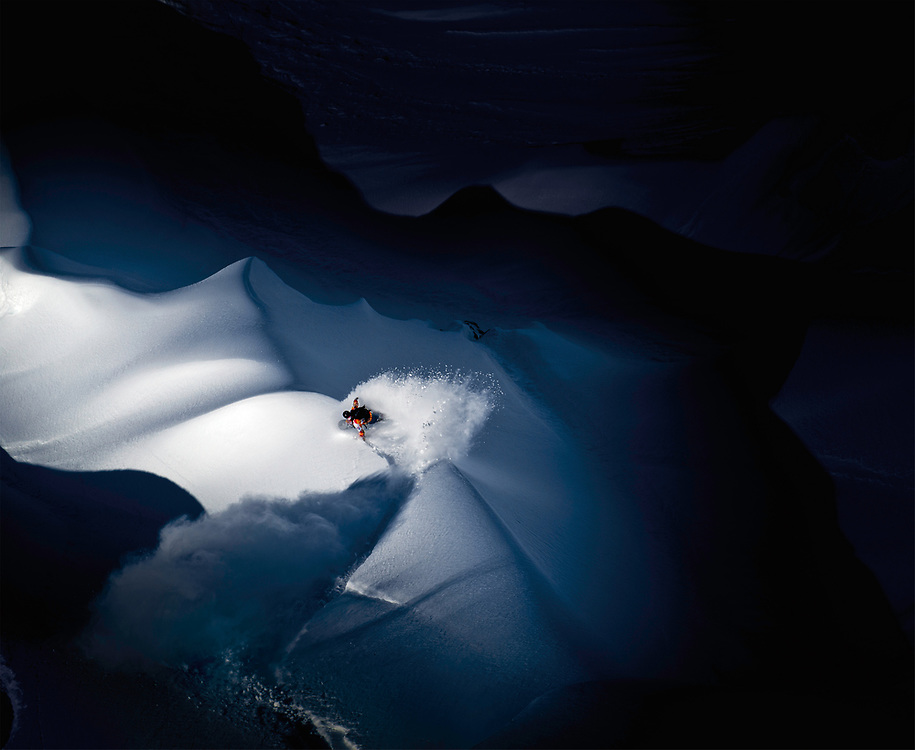